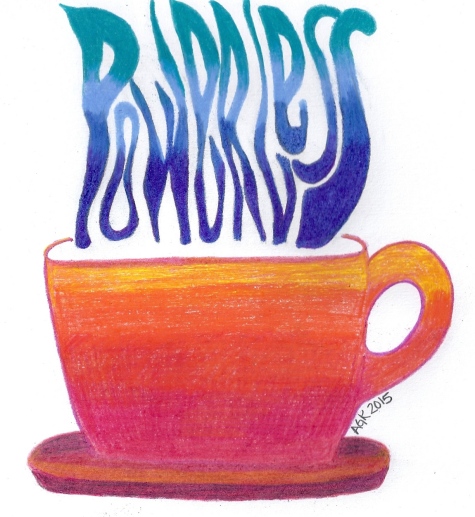 It had been a week since Lydia had asked Tracy to sponsor her, and even though she had no idea what the role of a sponsor truly was, she relinquished as much as she could to the idea of vulnerability. Tracy had insisted that Lydia call her every day. At first, the conversations had been awkward and stilted. While she had many women friends in her life, Lydia had never been one to share intimate details about herself or Henry. It only took a few phone calls, though, for her to realize that Tracy was not intending on being her friend, but rather something more altogether. Their conversations were sometimes short and sometimes long, but they always focused on recovery, the steps, and emotional sobriety. Lydia tried her best to answer Tracy’s questions honestly, but sometimes Tracy’s observations cut Lydia to the quick. Never had she felt so shallow as when she reflected Tracy. It only took a matter of days for Tracy to earned her trust.

In one of their initial conversations, Tracy had given her a short list of things to do, and so far, most had been accomplished.

The first item on her list was to read the Big Book of Alcoholics Anonymous. Lydia had already bought a Big Book a couple of weeks before. Normally a voracious reader, on a good day she could easily polish of an entire Danielle Steele or Barbara Cartland novel. But this book was different. If Lydia concentrated, thought really hard, she could make it a couple of pages before her mind wandered to what she might find on TV. Maybe it was the language. Maybe it was the subject matter. She didn’t know why, but most of what Bill Wilson wrote about was completely lost on her.

The second item on her list was to attend an AA meeting every day for ninety days. Although she had attended a meeting everyday for the last 22 days, sometimes two or three, the idea of ninety somehow seemed ridiculous. Lydia tried to argue this fine point with Tracy, but her sponsor seemed to have none of it.

Finally, Lydia was to begin her stepwork, the point that had brought her to her granite countertop on a Tuesday morning with a steaming coffee cup of green tea neatly positioned at a forty-five degree angle to a new journal, bought from Barnes and Nobles and bound in antiquated brown leather. Lydia had even bought a special fountain pen to record every piece of her step work. She wanted it just so. Even though she had only been sober a short while, Lydia looked forward to the day when she would have her own sponsee. When that time came, she wanted to be able to tell the girl that she worked her steps perfect.

On the first page, Lydia had neatly scrawled, “important phone numbers.” On the second page, she had neatly begun a list of goals. The list included running a marathon and writing a book. She even thought about returning to school, maybe getting a degree in psychology or addiction counseling.

But it was the top of the third page of the journal that had Lydia had become stuck. At the top, she slowly retraced the word powerless in the line, “1. Admitted we were powerless over alcohol and that our lives had become unmanageable.” On some base level, Lydia knew she could not drink anymore, therefore the correct answer simply had to be alcohol. And yet, the word powerless seemed more perplexing than that. If, she though, the line had instead read, “Admitted we were alcoholic and that our lives were unmanageable,” the answer would be more direct, simpler. She could admit she drank too much. But powerless. What did that mean? She wasn’t powerless against alcohol. She had a house and a life and, at least for the time being, a husband and a family.

After a few minutes, Lydia moved her pen down from the word powerless and slowly wrote, “Alcohol.” With a sigh, she set down her pen and closed the book. 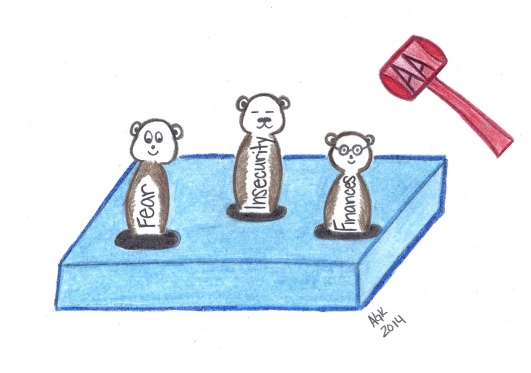 I’ve been up in my head a lot this week. I can’t help it really. There’s been a lot going on. Every time I try to combat one errant thought or emotion, another one crops up. It’s like the Whack-A-Mole of the dysfunction. Fear. Bam! Insecurity. Bam! Economic worries. Bam!

But as I sit here, I know all these things I am feeling and thinking are not real. They are manifestations of powerlessness and fear. I have a friend who always says, “My mind is out to kill me.” The melodramatic nature of that comment makes it hard for me to take it seriously, but I understand the sentiment.

If this past month had occurred when I was still drinking, I would not have been able to quiet the self-loathing and anger that dominates my particle brand of crazy. I would have fallen into a depression, the kind that results in lost jobs and torched relationships. I would have spent the coming month locked in my apartment sure that only antiseptic isolation and lots of vodka would decontaminate my life of chaos.

I do not need to dull my thoughts today because I have enough recovery in me to differentiate the false from the true. I know which ideas are based in fiction rather than reality, fear rather than strength. Once I pause, once I allow second thought to enter the picture, I can then act accordingly. I can quiet the crazy and move forward. One thought at a time. One day at a time. 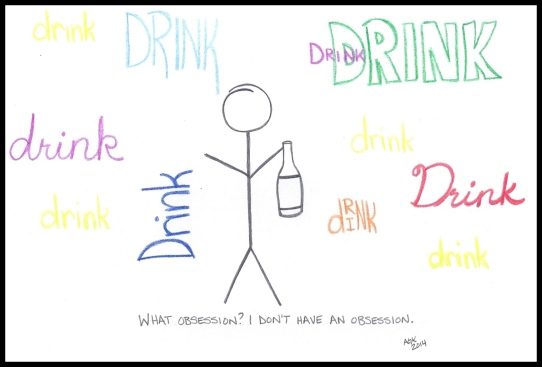 Usually, even the worst of us can stay off the drink for a day or two if we are seriously motivated by the adequate amount of force and calamity. The real trouble often begins around day three when the brain starts to convince one that maybe they have made too big a deal over whatever currently has them in a knot. I can stop. It ain’t no thing. I bet I could have one beer or two. Everything will be okay.

Lydia was conscience of being awake long before any move was made to get up out of bed. Instead, she laid there in the semi darkness of the curtained bedroom and tried to assess her physical and mental state of being.

The rhythmic beating of her heart seemed to pulsate throughout her body. She sensed she could feel the blood running through her arteries and back again. Next Lydia moved on to her stomach. She had eaten too much last night. In the mood to ride the wave of hunger, Lydia gorged on junk food and ice cream. It had made her feel better in the moment, but as the laid down to sleep, her stomach, unused to such sustenance, surged and gurgled. But by morning, everything seemed to be quiet again. With her eyes still closed, Lydia promised to take it easy with the food today.

As to her mental state, Lydia did not want to get out of bed. She had an odd sense of energy running through her, and yet simultaneously, she was so exhausted, she thought she could easy melt back into sleep. She had only fallen asleep a few short hours ago after hours of trying. Stress, fear, questions, had raced in her mind for an unendurable length of time. Having awoken to a sense of calm, Lydia was unwilling to let go even as her body was aching for movement and a shower. Lydia opened one eye, then the other, as the realization slowly started coming into focus. She couldn’t quite think through the thought. It was still fuzzy and out of focus. And yet there it was.

Her body seemed to be resisting the choices her mind was making. Was her whole life an ongoing battle between the desires of her mind and the reality of her body? How could that be? Weren’t they the same thing? Doesn’t the body support the mind? Wasn’t the mind the superior entity?

With a shake of her head, Lydia dislodged the thought and moved off towards the shower.

Lydia ordered a hot tea and made for the meeting room. She was a few minutes early, and the room was empty. Lydia had realized over the last couple of days that people tended to walk through the door just as the meeting was starting. Lydia walked over to the large poster on the wall labeled, “The Twelve Steps.”

“Step 1. We admitted we were powerless over alcohol- that our lives had become unmanageable.”

“Powerless over alcohol.” Lydia knew from endless TV shows and movie, from culture, that admission of the problem was the first step. But it looked different in this format. Powerless. It sounded so much more ominous and permanent and old fashioned than a simple, “Admitted we occasionally drank too much” or “Admitted we sometimes got a little out of control.” Lydia wasn’t even sure if she knew what that word mean. Powerless. Lydia kept rolling the word around in her mouth, tasting it on the tip of her tongue. Lydia was conscious to pick a seat for the meeting that had a full view of the steps. She took a sip of her hot tea. Powerless.