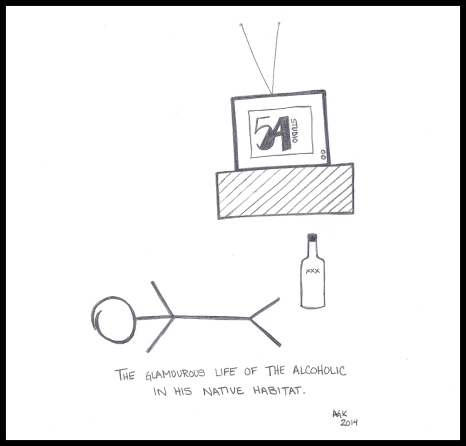 Some of my most favorites lines in the big book are, “For most normal folks, drinking means conviviality, companionship and colorful imagination… am I to be consigned to a life where I shall be stupid, boring, and glum?” (BB 151-152).

Let me start off by saying that I was born in a nice part of Houston, complete with bike trails and trees. My mom took me to church and sometimes bought me an ice cream cone after (Bubblegum of they had it; turtle if they didn’t). I had tons of books and art supplies and after school activities. My parents stressed good grades and participation on sports teams.

So, where I got this notion of drinking, I have no idea. No, no, not the notion of should I drink or why I drank. I got that. I mean the notion that alcoholics and drug addicts are brazen intellectuals and glamourous artists, pushing past the lines of conventionality into oblivion, the notion that alcohol and drugs allow one to experience life on a heightened, more surreal plane.

I decided that my perception of drinking is based not on the reality but fantasy. James Dean. James Bond. Hemingway on the Champs-Elysees. Andy Warhol at Studio 54. Hunter S. Thompson’s Las Vegas, “We had two bags of grass, seventy-five pellets of mescaline, five sheets of high powered blotter acid, a salt shaker half full of cocaine, and a whole galaxy of multi-colored uppers, downers, screamers, laughers… and also a quart of tequila, a quart of rum, a case of Budweiser, a pint of raw ether and two dozen amyls…Not that we needed all that for the trip, but once you get locked into a serious drug collection, the tendency is to push it as far as you can, (Fear and Loathing). The realization that all my drug fantasies exist in an era before I was even cognizant of what drugs were, is only further evidence that I have invented my own duel existence.

The reality is, that’s not the way my drinking looked at all. There was no step and repeat in front of the Marshall House. I was a writer that never wrote. A schemer. A dreamer. I was neither glamourous nor charming. At best I was a bar fly and at worst a depressed, isolated drunk.

I am lucky that I am able to realize that my fantasies of drinking and drugging are a fictitious twist of my imagination. That’s not the case with many. There is a guy I hear that speaks of waxing poetically as he drinks. He doesn’t get it. There is a girl who, while she is at meeting, laments about the friends she is missing; maybe she doesn’t have to give them up after all. She doesn’t get it either.

Everyday I wake up, there is a change to do something spectacular. ( I usually just end up at work, but there’s always that chance). When the book says, “You will gain a new freedom and a new happiness,” I get that. I am no longer held by the confines of the bar stool or liquor bottle. My brain does not hurt. My mind is not hazy. I have passion and ambition and love. If you are sober and stupid, boring and glum, then you’re doing it wrong.

There is an odd feeling of anticipation as I type this, an awkward mix of pride and embarrassment that has caused me to simultaneously have a smile and a stomachache. Yesterday, was the six month anniversary of this blog. I know; it’s insane. If this blog were in sobriety, it would be walking up for its blue chip. It would have successfully transitioned from rehab to IOP to a halfway house. The blog could chair a meeting, have a job, and if it were doing a step a month, be smack dab in the middle of its character defects.

On April 6, I was headed up to the annual women’s retreat I attend. (Yes, the same retreat, I wrote of in Monday’s blog.) I had just come off a terribly difficult and arduous year. I was depressed and floundering. I really did not want to go. I remember trying to figure out some way to back out, but my recovery simply wouldn’t let me. I knew I had to go, no matter what.

Towards the end of the weekend, a dear friend came up to me and very casually said, “I think you should start a blog.” Without a blink of an eye, I said no. I did not want to start a blog. Blogging is not real writing. I want to be Hemingway or Faulkner, not a blogger. (This is one of those times where I can see my alcoholism for the delusion that it is. Leave it to a girl who cannot even bear to show her writing to others to look down on a totally legitimate form of expression because it doesn’t jive with how she thinks Hemingway would have gone about it. Jeez Louise.)

That night, as I laid in bed, a singular thought kept eating away at the base of my skull. I got out of bed and began to write in the same fashion that I always write: alone in a quiet room, in a diary no one would ever see. A forth step, a written tenth, another attempt to put pen to paper in order to quiet the crazy. A piece of paper that would be thrown away in some not too distant future.

But this time, as I looked down on that paper, I realized the only reason I had for not showing my writing was fear. For as long as I kept my dream close to my chest, as long as I did not breathe a word of it, or show it to anybody, then that dream was safe. My dream would be safe from the cynics and the naysayers, from the realists and the defeatists. I realized something else too though. As long as I never pursued my dream, it would only ever remain a dream. My dream would never become my reality.

The Ninth Step Promises tell us, “We will intuitively know how to handle situations which used to baffle us. We will suddenly know that God is doing for us what we could not do for ourselves,” (Big Book 84). And at that moment, I was filled with peace. It is hard to articulate, but it felt like an enormous release of air from my chest. I just knew my friend was right, and I intuitively knew how to handle it. I had to show my writing, not in the distant future, not somewhere down the line, but now, immediately. That night I came home and started this blog.

These last six months have not been easy. I am still plagued by an incredible amount of fear and self-doubt. At any given time, I can convince myself that any number of my friends are encouraging me like a naïve cousin. “Pretty girl, she’ll realize soon enough.” Sigh.

But there are good days too. There are the days when I realize it does not matter if anyone actually reads or not because it is not the about a number or a reward, but the active practicing of courage and perseverance, and accountability. It’s about suiting up.

It is easy to reflect back on my sobriety and say: Without AA, I would not be alive. I would not have dependable friends or a remarkable man. But I also know that without AA, I never would have had the courage to write or the fortitude to post. I would not have been able to withstand the criticism or abandoned myself to a process that has no definitive ending. It’s saccharine to say, but I know it is true. AA put the right person in my path, with exactly the suggestion I needed to hear, at a time when I could hear it. And then gave me strength and courage to actually follow through.

The Big Book says, “Your imagination will be fired. Life will mean something at last. The most satisfactory years of your existence lie ahead.” (152). Yep, that’s about right.

Thank you to everyone who has read, subscribed to, commented, re-posted, shared, or otherwise supported this endeavor over the past six months.  You’re continued support means an enormous amount to me. Thank you, Lisa.