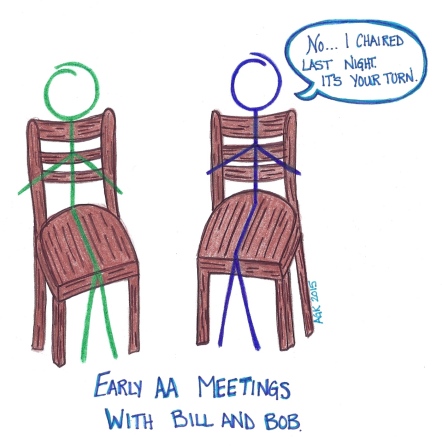 It’s 1935. A man stands in the wood paneled, dimly lit hallway of an Akron hotel. The man stands there, with his hand in his pockets. The jingling of the coins against one another reminds him of his hotel bill. He does not know how he is going to pay it. He’s busted. The business he had traveled to Ohio to conduct has fallen through. One more hope; one more disappointment.

His wife, back home in New York, has been hoping that this newest opportunity would come to something, anything. In the last years, she has been working at a department store. The hours are long, and the work is hard. He has let her down again.

But she doesn’t know yet. Alone, depressed, hopeless, full of self-pity, he hears the sound of the barroom. The man looks down the hallway. From the far end, a golden light emanates from the doorway. From it he can hear the tinkling of glassware and the slightly too boisterous laughter that stems from such places.

This man has been sober for six months, but now old thoughts turned anew begin to crowd his head. They are the thoughts that after six months, maybe he could take a couple of drinks. They are the thoughts of being a foreign city and that no one knows he is an alcoholic. And maybe just maybe, he could compose himself like a gentleman. All he needs is a few moments to forget his worries, take on a new persona, and talk to a stranger as if they were long lost war buddies. Yes, a few moments is all he needs to feel normal and carefree again.

But the man does not follow his desire. He turns away, and walks slowly in the other direction towards the telephone booth. Maybe he will call his wife. And there, next to the booth, hangs a glass case with the obligatory phone numbers that one always sees but never calls. Listed are the police department and hospitals and clergy. Calmly, the man picks up the phone and began dialing one of the clergymen at random.

I sometimes wonder what it must have felt like to be the only person in AA.

No book. No meeting. No coffeepot.

I question the fragility of life when so much rests on one man deciding whether to turn right or turn left.

One decision. One turn.

And I wonder of all the other people in recovery who turned the wrong way. I wonder what might have happened if they had turned the other way.