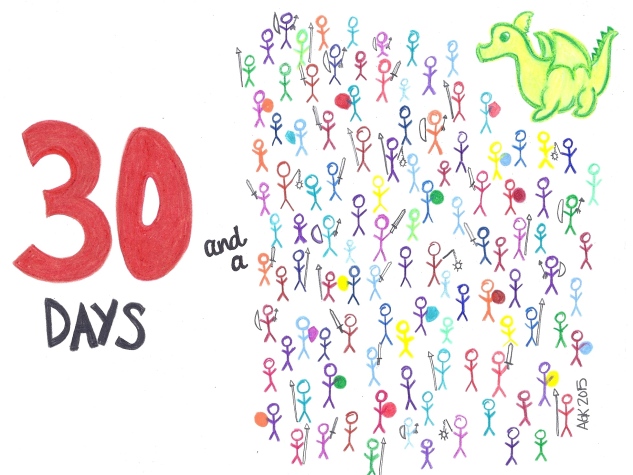 Lydia sat in the Starbucks at Echo Lane, sipping her green tea latte, and people watching through the windows. Over the last couple of weeks, Lydia had grown to like her little window seat on the world. It had become part of her new daily ritual along with the 3:15 meeting and the thought, if not the actual practice, of doing yoga.

So, on the day of her thirtieth chip, Lydia sat in her corner and looked upon the world. Echo Lane, Lydia had decided, was an fascinating cross-section of society. Students of Memorial High School, laden down with books and aspirations, filtered through the Starbucks and Baskin Robbin in the free spirit special to youth. It had reminded Lydia how happy she had been before Tuck died. She once had dreams and interests that mattered. She wanted to fly to Paris and sketch where the great artist sketched. She wanted to read the great works of literature, not because it would make her sound more interesting at dinner parties, but because all people should. The students of Echo Lane reminded her that life at one time seem mysterious and adventurous, something to revel in and enjoyed.

The other half of Echo Lane was comprised of the parents of the students. Most were like her, trying their best just to make it through the day. The dog had to go to the groomer. Sally needed a new tutu for dance. The parking lot was a juggernaut of SUVs with Cheerio-ed back seats and varsity club stickers. All those things, she thought, once seemed so important. In the microcosm of Memorial, so much rode on the perception of imperfect perfection, of unaffected beauty. There need to be a certain ease of life that was anything but easy to attain. But they all tried. Lydia had tried.

So, it was in this place that Lydia most often came to reflect on what should have been, what was, and what might be. She looked down upon her notebook where she had been casually tracing over the date. It was her thirtieth day of sobriety. She wondered how such an important day could go completely and utterly unrecognized by the entirety of her world, but that was the case. She had yet to tell any of her friends, nor her children, not even Henry about her sobriety. There was a part of her, she figured, that felt if she told them, it would make it real. One would think admitting one’s faults to oneself would be the hard part, but no… it was the telling to people who already knew, that you knew too. She couldn’t figure out how that could be, but such was life.

Lydia couldn’t help but think about her thirty days. Thirty days. She wanted not to think about it actually. She wanted somehow to be better that that. “Oh, thirty days. Yes, no big deal. Just called my sponsor and read the Big Book, yes, yes.” But it wasn’t like that. It was hard. She was embarrassed that only a couple of days ago the desire to drink came over her in such a torrent that she tore through her house, and had she found anything, she surely would have drank it. The thirty days felt a bit fraudulent. She felt she had failed.

Lydia did not know how long she had been lying on the floor of her kitchen that day, but it was long enough for the ceramic tile to slowly warm to body temperature; the bottle of vanilla extract resting in her palm.

Slowly, she ran her empty hand down her side to her jean pocket. With a nudge of her finger she edged her phone out of her pocket.

Lydia brought the phone up to the same level as the bottle and disengaged her stare from the first object to the second. She ran her fingers over the screen to unlock it. Henry was speed dial one. Her thumb hovered over the screen. She had not talked to him since she picked up her desire chip. She desperately wanted to. She wanted to call him and tell him everything her heart so achingly wanted to say, that she was sober and she loved him and missed him and wouldn’t he please come home. She would tell him that she needed him. He would come. He always came. But she didn’t. Instead she pressed speed dial seven.

As the phone rang in her ear, Lydia pressed her hand against the tile and lifted her frame off the floor. She walked over to the sink and as the voice on the other end said, “Hello,” Lydia had poured the vanilla down the drain. “Hi, Tracy. I think I finally understand what you mean by powerless.”

Twenty minutes later, Lydia and Tracy had met under the shade tree in the parking lot of the mall to reconstruct what had triggered her. Talking took the power out of it. And then she kept going; Lydia told Tracy about Tuck, the accident, the hospital, Henry. She spoke and spoke and spoke until her throat became raw and the sky started turning the shade of twilight. But it had worked. The demons that had haunted her day had diminished my nightfall. Lydia went to a meeting, then another, then drove home and went to bed. And as she laid her bed on the pillow, she remembered what Tracy had told her, “Any day I don’t drink is a successful day.”

Lydia picked up her latte and walked out to her car. There was something to subtly awkward about not drinking, she thought. It shouldn’t be a big deal, and yet it was. It shouldn’t be so hard, and yet, well, she had made it. That’s all that mattered, she supposed. As she opened her car door to get in, Lydia looked out one last time over the parking lot, she looked at the ladies with their grocery bags and strollers. Quietly, to herself she whispered, “Thirty days and a thousand nights.”